It doesn’t snow in Tulsa very often anymore, so when it does its something to celebrate. On the morning of December 23, I woke up to snow on the ground. The excitement made me act like a little kid on Christmas morning, after expressing a few expletives I got myself together, grabbed my camera and bolted out the door. There is no way I was going to miss this. I ended up staying in town. First stop was down on the river, then I headed to a park just on the edge of downtown.

On the river, there were a number of Seagulls about out over the middle of the river, with all of their activity along with them being white, it proved to be a bit difficult to catch them in the act of being them. However, I was able to catch a Blue Herring making his way up river.

I did like the view of Turkey Mountain on the other side of the river. It created a nice wintry scene, with all the leaves gone along with the blanket of snow covering most everything. After I offloaded the image a began to go through them. I noticed that there was a person standing in the clearing up on the hill. I suppose she or he was looking out over the city under its winter blanket, but a little part of me wonders if they were watching me photograph the river. After seeing there was a person up on one of the trails kinda wish I had gone up there myself.

After leaving the river I set out to run a couple of errands before heading downtown to shoot. The scene I was hoping to capture was the view of downtown from Centennial Park, with a bit of sun coming through the clouds to highlight the buildings. As I drove up Lewis Ave I began to see the sun coming out, “Oh I hope it works out” I thought to myself. The shots I got were almost spot on, the conditions weren’t perfect but they never really are. 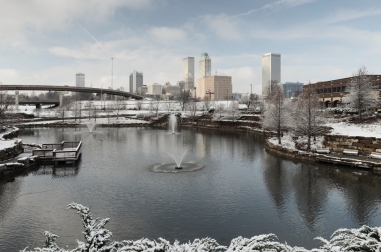 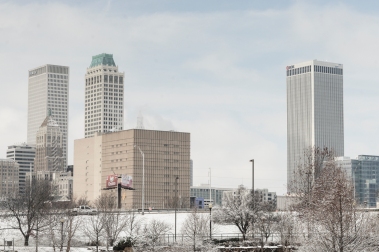 Hopefully this wont be the only day that we have snow here in Tulsa, but if it is I’m glad that I was able to enjoy this one while it was here. Especially since that it was gone by that afternoon.